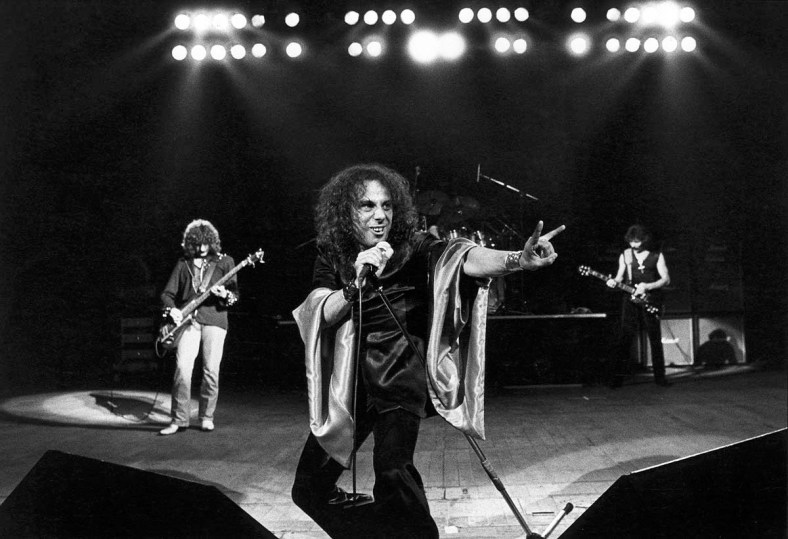 The Battle of Heaven and Hell, Where the Mob Rules, and the Dehumanizer is the Devil You Know

The Neon Knights and the Children of the Sea met Lady Evil in the battle of Heaven and Hell. Or so they thought. They met at the Wishing Well, there to see who would Die Young and who would Walk Away. Win or lose, all combatants knew that in battle, Lonely Is the Word.

And the two sides did Turn up the Night. Voodoo flourished even in the very Sign of the Southern Cross, neither side knowing that E5150 was the code of their demise. First the Mob Rules, then the embittered County Girl retaliates as souls are Slipping Away, Falling off the Edge of the World Over and Over.

As the battle raged, the Computer God tallied the lost, for After All (The Dead) alone continue beyond the computer-generated TV Crimes, to send Letters from Earth to the Master of Insanity, hoping he will use his Time Machine to erase the Sins of the Father before it is Too Late, before each I is Buried Alive.

And The Devil Cried as the Shadow of the Wind shrieked against the Ear in the Wall.

Ultimately, Atom and Evil unleashed Fear once kept inside the Bible Black, to Double the Pain beyond the ministrations of even a Rock and Roll Angel. The Turn of the Screw proved so painful that it led to even the most sane and compassionate toward Eating the Cannibals, to Follow the Tears to Neverwhere, losing the last vestige of hope for Breaking into Heaven.