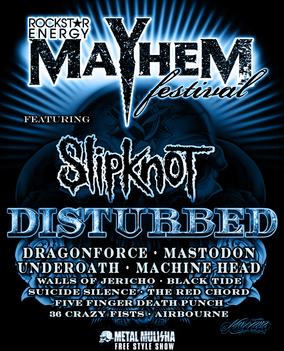 On this date in history, 8/13/2008, the inaugural edition of the Mayhem Festival arrived at Deer Creek In Noblesville just in time to fill the void left by the dearly departed Ozzfest, which had ceased to be a touring fest after the free show the previous year.

I always love finding a band I’ve never heard before and getting to witness a set that makes me a fan. Such was the case with Suicide Silence…they just took that stage and OWNED IT…just an absolutely crushing set of brutality, insane energy, and pure confidence.

The Red Chord made me a fan, too. I didn’t get to see much of their set because I was in the process of meeting Machine Head when they were on stage, but as I was talking to Rob Flynn, he suddenly jumped up on a chair and told me to check out an event that was taking place during The Red Chord’s set.

They did a “Wall Of Death” that was utterly crazy…first time I had ever seen one of those. Rob Flynn, who has most likely seen everything that metal has to offer, took the time to make sure I got to see it, and I glanced over at him and marveled at the gleam in his eyes and the huge grin on his face and realized that he is just as much a fan of our beloved metal music as I am. Needless to say, my love of Machine Head grew 3 sizes that day, much like the Grinch’s heart in the Dr. Seuss fable.

A few quick words about Walls Of Jericho before I get back to the mighty Machine Head…they were so amazing! Candace Kucsulain, the ginger headed female lead singer of the metalcore band, was literally like the Tasmanian Devil, exhorting the metal masses to start circle pits, crowd surf, and just jump up and down and scream their heads off. She knows how to get a crowd into it, and her band used that skill set to great advantage.

I put them right up there with Suicide Silence on the intensity Richter Scale! Machine Head were the final band on the second stage, and they were phenomenal. Flynn’s vocals were just massive and perfect, and the band were tighter than anything this side of Megadeth…just a fine tuned killing machine, I mean Machine Fucking Head!

Mastodon began the proceedings on the main stage and brought their own precision to their unique brand of progressive metal. Brann Dailor is one of the best drummers in metal, perhaps in all of rock music, and his playing is the perfect style for the band’s ever shifting canvas of complex riffs.

I’m not a fan of Dragonforce (although I have to acknowledge that their guitar players are extremely gifted players…the vocals and rehashed Iron Maiden ripoff rhythm patterns by the drummer and bass player just ruin it for me), and I actively dislike Disturbed, so I took a break during their sets and gathered energy for the storm that is Slipknot.

The 9 finished the virginal edition of Mayhem with a colossal show that the Iowa bred madmen have perfected over the course of their long career…everything louder, brighter, faster, and crazier than everything else…and that’s a good way to close out a show that had just begun a great 8 year run!