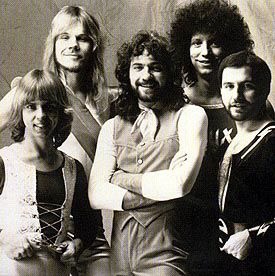 On this date in history, 8/25/1978, I saw Styx at the State Fairgrounds in Indianapolis. The opening act was Bob Welch, formerly of Fleetwood Mac, who left that band just in time for them to enlist Lindsay Buckingham and Stevie Nicks on their road to global superstar status. I don’t recall the song he had on the radio at the time, but he played a decent set and paved the way for a stellar performance from Styx. The Grand Illusion was their current album at that time, and “Come Sail Away” was a gigantic hit. I was quite impressed with their vocal harmonies and twin guitar attack. Possibly the greatest thing about this show was the fact that “Mr. Roboto” hadn’t been written yet! All in all, it was a great show…perfect weather, impeccable sound, killer light show, and a lot of the early Styx songs that rocked a lot harder than the later stuff.