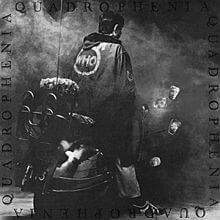 In 1973 The Who released Quadrophenia, a double album rock opera full of brilliant performances from the legendary English rockers. My introduction to this music came to me via a clock radio in a hotel room in Ohio during a family vacation to King’s Island amusement park. While the family was preparing for the day’s adventures, the song I’ve Had Enough played on this cheap little radio and I was literally hypnotized by the sound of The Who at the peak of their formidable powers. Even on the low volume/low quality speaker level, I was blown away by the sheer brilliance of the composition of this song…the insane drumming of Keith Moon, the liquid ripple of John Entwhistle’s distinctive bass style, Pete Townshend’s surgical strike battering ram rhythm guitar assault, and Roger Daltrey’s soaring alpha male primal scream at the end of the song…I was hooked on the spot. I’m still hooked to this day. Quadrophenia is one of those timeless albums that deliver the goods with every listen. I’m glad the clock radio wasn’t tuned to a muzak station that day!