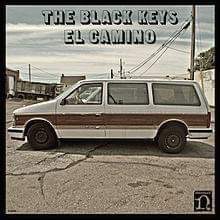 In 2011 the band I was in decided to cover Lonely Boy by The Black Keys, so I bought El Camino and learned the song.

After that, I got into the rest of the album, and it is a really solid little rock ‘n’ roll record…kind of like something out of a time machine.

The Black Keys sort of threw all their influences (really cool influences, by the way) in a blender and came out with an album that would have fit in nicely in several preceding decades while still sounding modern.

A pretty neat trick and something that not many artists could pull off, but The Black Keys aren’t your typical band.

I was pleased to discover that in addition to Lonely Boy, El Camino also featured several other songs that were equally as good, like Little Black Submarines, Gold On The Ceiling, Mind Eraser, Run Right Back, Sister, and Dead And Gone.

Oh yes, that band I was in at that time is in the process of re-forming, and we played through Lonely Boy at our first practice…and it still rocks!