Whitechapel: This Is Exile 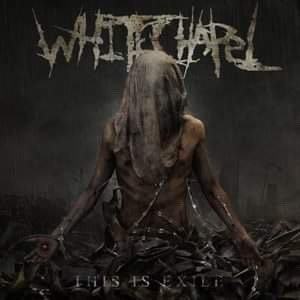 Whitechapel released the murderous musical rampage of This Is Exile (2008) and made a big time fan of me.

I discovered them via a video on the reboot of MTV’s Headbanger’s Ball.

The song was Possession off of This Is Exile, and I was captivated by the relentless brutality and attack of the Tennessee deathcore band.

Phil Bozeman’s voice is otherworldly; a beast of a voice, with almost bottomless low guttural growls, and a furious delivery. Whitechapel utilizes 3 guitar players that work up a tapestry of violent sound, but are also capable of subtle nuances and eerie atmospherics at just the right places, giving the band more depth than many of their contemporaries.

Some of my favorites from This Is Exile include Possession, Messiahbolical, To All That Are Dead, Father Of Lies, Daemon (The Procreated), Exalt, and the diabolical title track.

I witnessed Whitechapel perform This Is Exile in its entirety recently at Piere’s in Ft. Wayne, IN.

The intimacy of the club setting was the perfect location for a completely vulgar display of power.