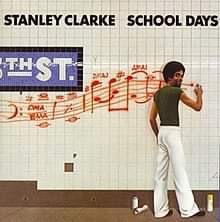 Another pioneering virtuoso bassist from the jazz fusion explosion of the 1970’s, Stanley Clarke rose to fame with Return To Forever and also put out a string of excellent solo albums. Probably the best known (and my personal favorite) was School Days (1976).

The song School Days kicked off the album with one of the best bass riffs of all time and featured Clarke’s ripping bass solo with blinding speed and plenty of slap ‘n pop.

Desert Song was an acoustic number with Clarke on standup bass and John McLaughlin on guitar.

The closing track, Life Is Just A Game, showcased Clarke on a brief lead vocal, plus an insane guitar solo from Icarus Johnson and an equally thrilling bass solo where Clarke matched the guitarist’s speed and intensity note for note. Some of the drummers on the album included Steve Gadd and Billy Cobham, and George Duke contributed some keyboards.

School Days is a great album from one of the best bass players in the game.