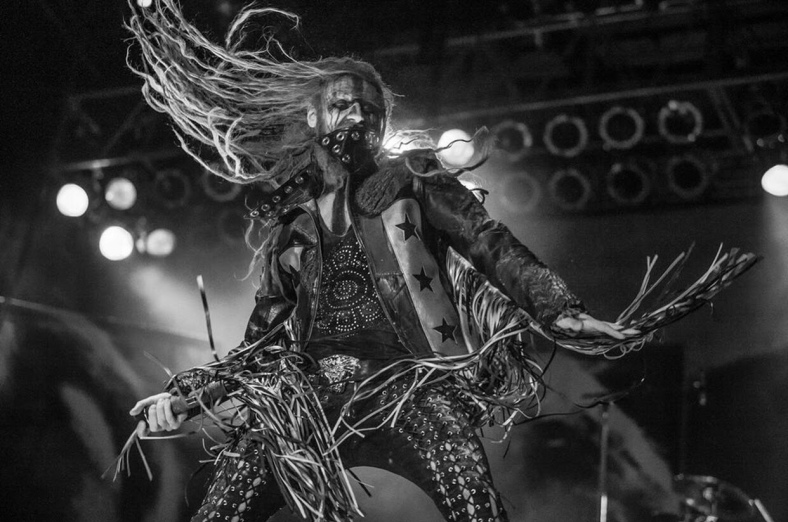 Rob Zombie (born Robert Bartleh Cummings; January 12, 1965) is an American musician and filmmaker. He is a founding member of the heavy metal band White Zombie, releasing four studio albums with the band.

He is the older brother of Spider One, lead vocalist for American rock band Powerman 5000.

Zombie’s first solo effort was a song titled “Hands of Death (Burn Baby Burn)” (1996) with Alice Cooper, which went on to receive a nomination for Best Metal Performance at the 39th Annual Grammy Awards.

In 1997, he began working on his debut solo studio album, Hellbilly Deluxe, which was released in August 1998. A month later, Zombie officially disbanded White Zombie. Hellbilly Deluxe went on to sell over three million copies worldwide and spawned three singles. He released a remix album, American Made Music to Strip By, the following year that contained songs from Hellbilly Deluxe. Zombie directed the horror film House of 1000 Corpses in 2000, though the controversial project was not released until 2003.

His second studio album, The Sinister Urge (2001), became his second platinum album in the United States. In 2003, Zombie released the compilation album Past, Present, & Future.

Zombie directed The Devil’s Rejects (2005), a direct sequel to his prior film House of 1000 Corpses. The project received a more positive reception than its predecessor.

His third studio album, Educated Horses (2006), was a departure from his earlier recordings. The album became his third to enter the top ten of the Billboard 200, though saw a decrease in sales when compared to his previous releases.

Deciding to focus on his directing career, Zombie directed the horror film Halloween (2007), a remake of the 1978 horror classic of the same name. The film became Zombie’s highest-grossing film to date, though was met with a lukewarm critical reception. He later directed Halloween II (2009), which failed to match the success of its predecessor.

He released the animated film The Haunted World of El Superbeasto that same year. Zombie returned to music with the release of his fourth studio album, Hellbilly Deluxe 2 (2010). The album peaked at number eight in the United States and sold over 200,000 copies in the country.

He directed the horror film 31 and has purchased the rights to a film about the NHL team Philadelphia Flyers, titled The Broad Street Bullies; no release date for the film has been announced. Since the beginning of his music career, Zombie’s music and lyrics have featured notable horror and sci-fi themes.

His live shows have been praised for their elaborate shock rock theatricality. Since beginning his solo career, Zombie has sold an estimated fifteen million albums worldwide.