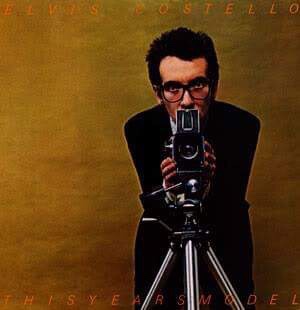 Elvis Costello’s second album, This Year’s Model (1978), was his first recording with The Attractions, and the musical muscle they provided for his brilliant songwriting was a perfect match. From the opening snarled words from Costello’s mouth, No Action sets the tone of alienation, frustration, and angst that pervades much of the album.

Literally every song on This Year’s Model is enriched by earworm melodic hooks and deliciously venomous imagery from the angry poet with the horn rimmed glasses and the intellect to present as the punk rock answer to Bob Dylan.

This Year’s Girl, The Beat, Pump It Up, Little Triggers, You Belong To Me, (I Don’t Want To Go To) Chelsea, Lipstick Vogue, and Radio, Radio just stick in your head for days.

Costello went on to explore many musical styles and constantly evolved and grew as a lyricist and songwriter, but for my money, his first 3 albums (and particularly This Year’s Model and Armed Forces) remain the cream of the crop.