Alice Cooper: Welcome To My Nightmare 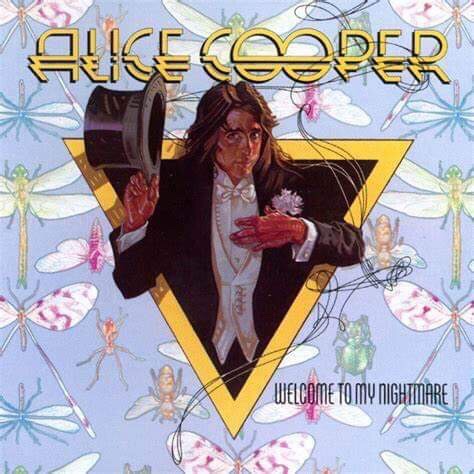 Alice Cooper released his first solo album, Welcome To My Nightmare, in 1975. All his previous albums had been the Alice Cooper group. With Nightmare, the Coop had basically bought Lou Reed’s stellar backing band and enlisted the production wizardry of Bob Ezrin to create the fantastic concept of a boy/man named Steven and his nightmares.

Alice made a tv special based on the record and launched a massive tour in support of his new solo identity. I remember purchasing this album and spending considerable time investigating all the sonic possibilities within via a great set of headphones.

Horror movie legend Vincent Price performed a suitably creepy voice over for the song The Black Widow (that I have memorized still to this day).

Images abound in the songs, like the frozen lover in Cold Ethyl, the abused woman in Only Women Bleed, the spiders coming out to play in the bridge between Devil’s Food (with one of the heaviest riffs I had heard up to that time) and The Black Widow. Then, on side two, the cinematic trio of Years Ago, Steven, and The Awakening provided me with a mini-movie of the mind every time I listened to them.

The hard rocking Department Of Youth united all of us alienated teens, and the nearly punk energy of Escape brought the party to a satisfying close.

In 2011, Cooper even made a sequel, Welcome 2 My Nightmare (reminding me that I need to pick that up one of these days), another concept album that continues the story line, I believe. I have been an enormous fan of Alice Cooper since my very earliest days of being consumed by my lifelong obsession and love affair with rock music.

In July of this year I will be seeing him live for the 10th time. I am just as excited about this as I was the first time I saw him perform in 1978. Long live the Coop!