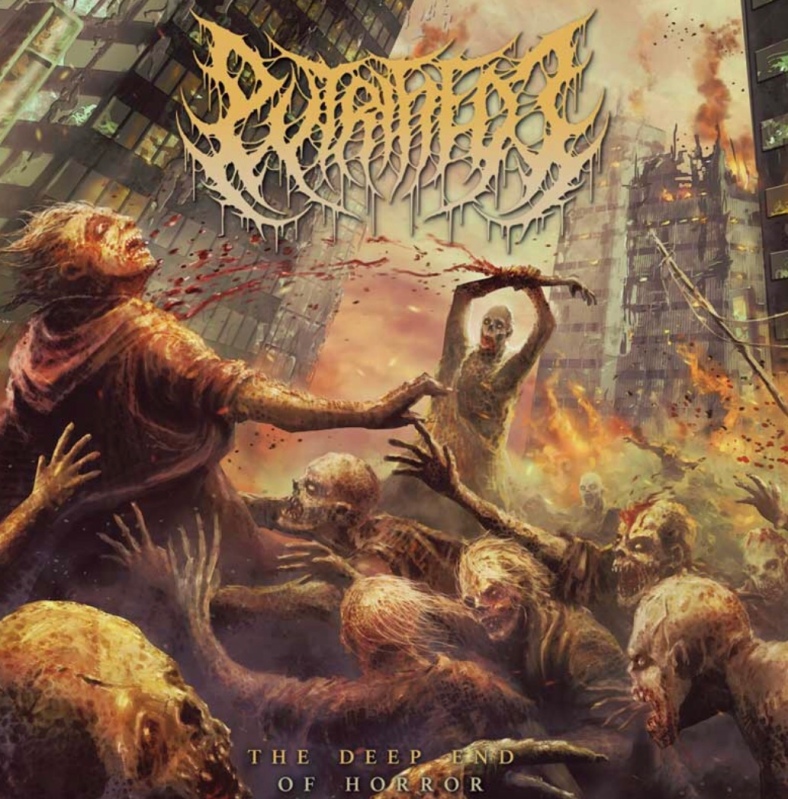 Civilisation lies in ruins; everything our desperately vain species has valued and striven for is in flames. The streets seethe with the monsters we have become and only one thought, beautiful in its simplicity, occupies those once busy, troubled minds – kill. Kill endlessly, kill ruthlessly, kill savagely until there is nothing left to kill. All those centuries of evolution only to topple from our lofty thrones in total and utter regression…stripped of pride and pretence mankind has only one core desire, to destroy utterly and completely. Our destiny is madness, bloodlust and death.

With their new EP, The Deep End Of Horror, Putrified J bring you the perfect soundtrack to our ultimate demise. These songs encapsulate that pure, undisguised lust for violence. Never has a release been more aptly named…there is no dipping your toe tentatively into the bloody water here, just immediate immersion in the deep end of horror! The title track drags you beneath the surface with a spoken promise of ‘absolute destruction’ and then ‘Sickening Decapitation’ sucks you into a maelstrom of murderousness. One gasp of air and then ‘Relentless’ attacks – surely one of the most intensely brutal tracks you will ever experience. There is no respite from the assault as The Deep End Of Horror progresses, no hidden, deeper meaning, no moments of tranquil reflection – nothing but death.

Originally created by Jason Lambert in 2009 and still steered by his hand to this day, Putrified J has used up and consumed plenty of collaborators on its decade-long, gruesome journey. However, with Death Blood Destroyer guitarist Hervé Dieudonné joining the crusade of carnage Putrified J have perfected their repugnant chemistry. This band have never sounded more dangerously depraved, never come closer to defining the essence of brutality and celebrate their 10th anniversary with their finest release to date.

When Comatose Music unleash this beast be warned, this is for die-hard death maniacs only. This is the sound of the end of the world.