Written By Braddon S. Williams AKA “The Concert Critic” 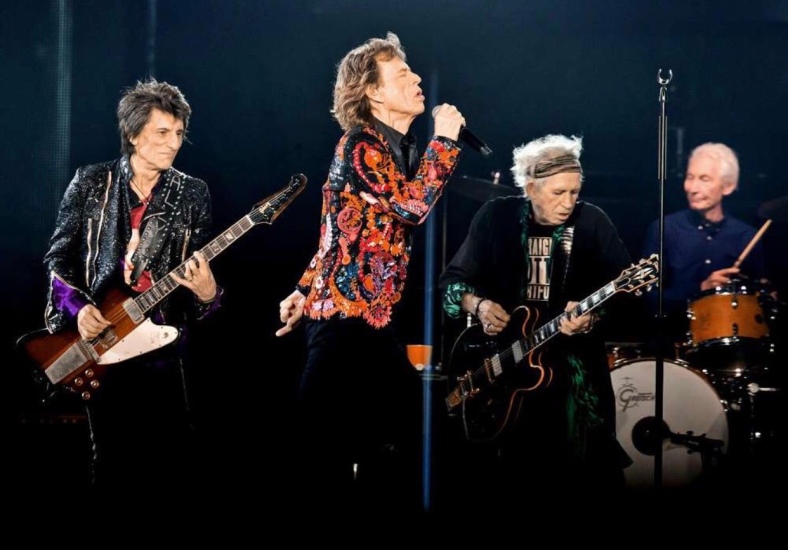 On this date in history, 6/25/2019, my bucket list was shattered…Shattered! Shidoobee, shidoobee, shidoobee…but I digress…I saw The Rolling Stones! The World’s Greatest Rock ‘n Roll Band! I never thought this would happen in my lifetime, but I finally got to witness these legends.

As fate would have it, Mick Jagger endured a heart surgery and the entire tour had to be rescheduled over his recovery, resulting in my friend and I getting to see just the second show on the tour!

We traveled through the insanity of Chicago traffic, through an intense hail storm, through being directed to 3 different entry gates before we finally arrived at our excellent seats. At this point I allowed myself to realize it was really going to happen!

I shot some video of Soldier Field steadily filling up with hordes of Stones fans, many of whom probably were feeling the myriad of emotions I was experiencing at the exact same moments.

Finally, as dusk was giving way to darkness, the lights and video displays started flashing and a booming voice announced the famous words, “Ladies and gentlemen…The Rolling Stones!” Keith Richards was launching into the high octane guitar riff of Jumping Jack Flash; Charlie Watts a millisecond behind him, already steadying the beat and propelling the engine that is the most iconic pure rock and roll band in the history of this universe.

Mick Jagger, 75 years young and fresh from heart surgery, was singing and gesturing, gyrating, displaying moves like, well…JAGGER…and Ron Wood was there with that big lovable grin, and the rest of the extended band were in lock motion with the four mains…and it was absolutely breathtaking!

I have seen the setlist from the Friday night show, and am impressed at how many songs were changed out for our show. The Stones are not a cookie cutter group that plays the same show in every city.

We got a different opening song, and a different acoustic set on the extended stage. Our acoustic songs were a rare Play With Fire, and a killer Sweet Virginia; proving beyond a doubt what I have said for decades;

The Rolling Stones are the best country band on the planet!

A sizzling Miss You midway through the show proved they are also the best r&b and disco band on Earth, too.

Bassist Darryl Jones was featured in an extended bass solo that showcased his funky side without being too flashy; in other words, classy perfection. The horn section had moments to shine, too.

As a former trumpet player I was happy to see an actual French Horn on You Can’t Always Get What You Want, instead of a trombone.

The sax player who took over from the late great Bobby Keyes delivered a sizzling solo on Brown Sugar, as did longtime keyboard guru and band director, Chuck Leavell.

The band introductions were super entertaining, displaying the adoration the fans feel for Ron Wood and Charlie Watts. The biggest love was shown to the immortal Keith Richards, who displayed his rogue pirate persona before he sang the soulful Slipping Away (one of my personal favorite Keith vocal songs) and the wonderful Before They Make Me Run. Keith made a mistake and started Midnight Rambler on the wrong guitar, resulting in Jagger stopping the band and proclaiming they were in the wrong key! Mick said it was still early in the tour and that they still had time for a fuck-up or two! Of course, the crowd loved his candor, and the Stones proceeded to play a blazing Paint It Black.

After a quick guitar change, Keith launched back into Midnight Rambler with a vengeance, and the band matched his intensity, delivering what for me was the highlight of a concert that was totally full of highlights…a stunning 11:30 worth of blazing, muscular, menacing blues…proving that these guys are most certainly not doing this for the money. That type of hunger and passion simply cannot be faked.

Each of the four primary Stones filled me with awe, from Jagger’s nonstop moving (the man literally never stopped for a moment), to his phenomenal harmonica playing and solid rhythm guitar work, Richards and Wood displaying what Keith lovingly describes as “the ancient art of weaving”, guitar lines playing cat and mouse between the two venerable masters, and of course the economy and rock solid dominance of Watts’ sublime drumming.

The sound was pristine (especially considering it was in a football stadium with an open roof) and the lights and video screens were state of the art.

I’m kind of bouncing in and out of the actual timeline, but some other highlights were an astonishing Tumbling Dice, Bitch, Honky Tonk Woman, Start Me Up, It’s Only Rock ‘n Roll, and Sympathy For The Devil.

There had been an online vote for a song and the winner for our show was Monkey Man…and it was a swaggering gem!

The encores were an incendiary Gimme Shelter and the finale of (I Can’t Get No) Satisfaction (complete with fireworks…a LOT of fireworks)!

For nearly 2 hours, these legends proved without a shadow of a doubt why they are simply the best at what they do. My bucket list is shattered…Long Live The Rolling Stones! Thank you Mick, Keith, Ronnie, Charlie…and all the rest. You guys are the soundtrack to my life…I got Satisfaction last Tuesday…if you try sometimes, you get what you need!