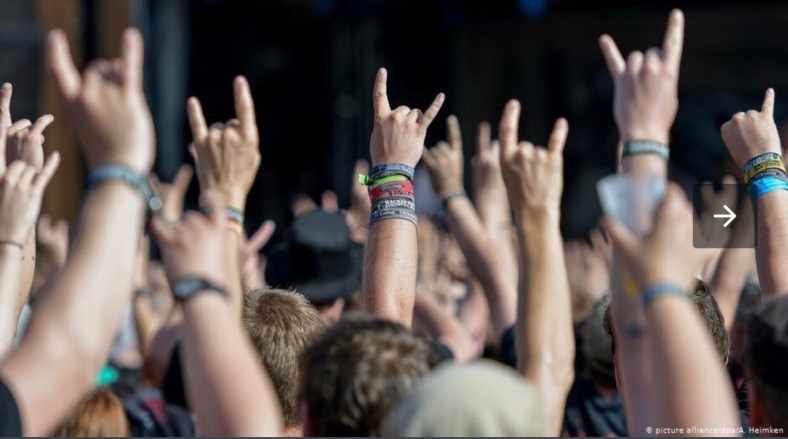 Wacken Open Air is one of the world’s biggest heavy metal festivals. What started as a village music festival 30 years ago meanwhile draws metalheads from all over the world. Here is what makes W:O:A so unique.

Party time in the village

Every first weekend in August the “population” of the tranquil town of Wacken explodes: Its 2,000 residents take on some 80,000 metalheads. During the three-day event, the festival goers turn the village into the third-largest city in the German state of Schleswig-Holstein. The organizers provide the necessary infrastructure, including a tent city, showers, toilets, signposts and utility poles.

More than 150 acts on nine stages — Wacken Open Air is one of the biggest metal festivals in the world, along with France’s Hellfest and the Belgian Graspop Metal Meeting. The visitors and the bands are international. Top act in 2019 is US thrash metal band Slayer. After more than three decades on stage, the band is retiring, so this is their final festival show in Germany.

How it all began

In 1990, two metal musicians from Wacken had the idea to stage a festival dedicated to their favorite music in the village gravel pit. The pit was already tried and tested for mass events, as a local motorcycle club also met there; in the early days, the club members even provided the security at Wacken. The first festival welcomed 800 visitors, today the event draws 80,000.

Pilgrimage to the ‘holy land’

The W:O:A festival area is huge, spread out over an area bigger than 330 football fields and surrounded by 45 kilometers of fencing. The heart of it all is the “Infield” (photo) stage area, affectionately called “Holy Land” by the metal-loving crowds. It is not just a simple field, either: drainage systems, gravel and compactors help make sure visitors don’t fall into holes or sink into the mud.

The village welcomes the who-is-who of the metal scene. They rock one of the nine festival stages — with the three main ones named “Faster,” “Harder” and “Louder.” Motörhead and Iron Maiden are regular festival guests, alongside other metal legends such as Alice Cooper, Judas Priest or Deep Purple. The Rammstein concert shown above is from 2013.

Metalheads at Wacken have demonstrated they aren’t particularly violent. Even though festival goers consume some 10,000 liters of beer per hour, only 20 bodily injuries were reported in 2016, and that number went down to 12 in 2017. Perhaps headbanging helps people get rid of potentially aggressive feelings.

Defying the weather is a tradition

Wacken is a summer festival, but in northern Germany that is not necessarily a guarantee for sunshine. On the contrary, W:O:A is rained on regularly. Mud battles are legendary and reliably provide spectacular photos. This year’s weather forecast adds hail and squalls to heavy rain — a truly hardcore gift from the heavens for the 30th festival anniversary.

Don’t these metalheads look like warriors from the “Mad Max” movies? Welcome to Wasteland, another part of the festival, an area designed in post-Apocalyptic style by the Wasteland Warriors artist collective. The costumes are always homemade and coordinated, and they add to the eerily beautiful end-of-time mood.

From an Apocalyptic future to the past: Wackinger Village is built to resemble a medieval market and has developed into an independent medieval event. There are bagpipes and fire-eaters, medieval rock on stage and honey wine at the bar, while knights in shining armor tackle each other on the battlefield.

Germans are known for their beer, and for being thorough. Wacken Open Air offers an amazing alliance of the two, namely the legendary beer pipeline. In the past, trucks hauled in beer in huge quantities, which made for even muddier grounds. Thanks to miles of pipeline, that’s history. Quick tapping systems ensure the constant flow of beer.

Most of the village’s residents look forward to the festival despite all the noise and garbage. Many help with the construction, tapping beer and showing visitors where to pitch their tents. The local shops love the crowds. A veritable “Metal Church,” the village church is part of the festival program, with folk and medieval music and metal services.