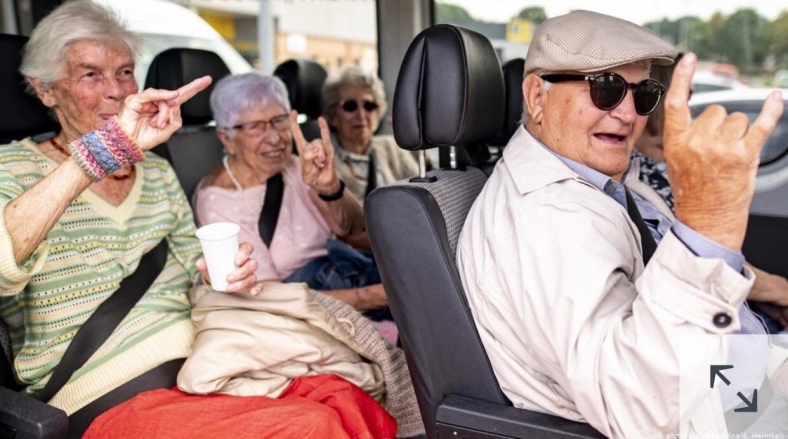 Breaking stereotypes, and showing that you are never too old to rock and roll, a group of senior citizens is attending the world’s biggest heavy metal festival in northern Germany.

Wacken Open Air, the biggest heavy metal festival in the world, starts this week in the fields outside a rural German village north of Hamburg.

The frequent wind, rain and mud, along with the hard rock and 70,000 metalheads, mean the festival is not for the faint of heart. But don’t tell that to 13 senior citizens who have taken a bus from a local nursing home to join in the revelry.

On board the party bus is 92-year-old Ilse Schaefer, who sticks her fingers out like horns in the ubiquitous heavy metal sign, and cries out “Wackeeen” as the 12 other elderly metalheads follow her lead. The oldest person in the group is 95 years old.

It is the 6th time the “Haus am Park” (house on the park) nursing home in the nearby town of Heide has organized a trip to Wacken. Visiting the festival has become a highlight of the year.

It is Schaefer’s third trip to the festival. She said she was skeptical of the music at first, but was taken in by the atmosphere of the festival. She enthusiastically greets astonished younger festival goers with her best heavy metal sign.

The trips to Wacken began six years ago after a 59-year-old AC/DC fan at the nursing home suffering from multiple sclerosis told manager Susann Kroos that he’d always wanted to attend Wacken. Kroos organized the first trip as a surprise birthday present for the man.

Most of the seniors at the nursing home are familiar with the festival, as they come from the area and have children and grandchildren who often attend. Kroos said that by attending Wacken, the residents of the nursing home learned how friendly metal fans can be.

Wacken Open Air, running until Sunday, is celebrating its 30th birthday in 2019 and 75,000 fans are expected to attend.