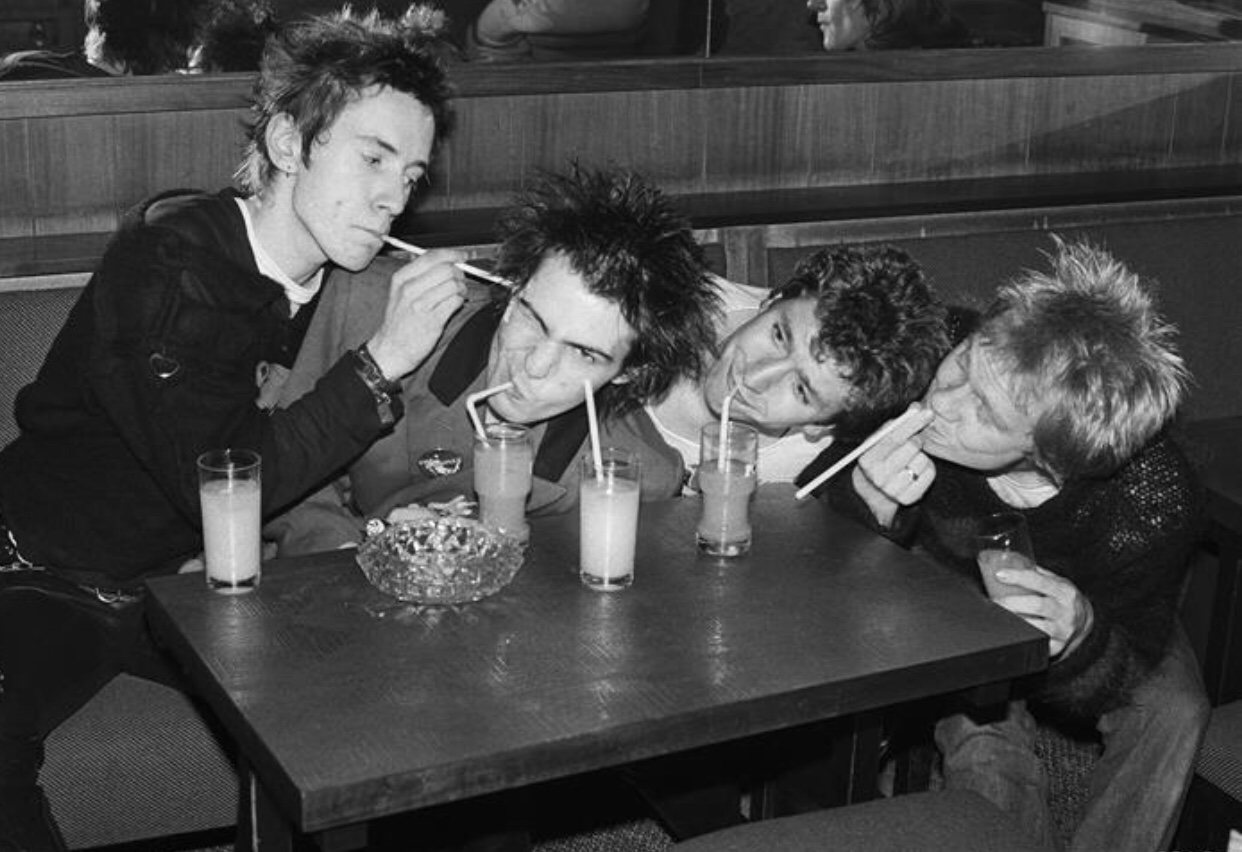 Welcome to our “Psychedelic Lunch Series,”where we find out how deep the rabbit hole really goes and explore music from the 60’s to today. Weekdays At Noon EST. Enjoy the trip!

The Sex Pistols, rock group who created the British punk movement of the late 1970s and who, with the song “God Save the Queen,” became a symbol of the United Kingdom’s social and political turmoil.

The Sex Pistols began mixing 1960s English pop music influences (the Small Faces, the Who) with those of 1970s rock renegades (Iggy and the Stooges, the New York Dolls) in an attempt to strip rock’s complexities to the bone. By the summer of 1976 the Sex Pistols had attracted an avid fan base and successfully updated the energies of the 1960s mods for the malignant teenage mood of the ’70s. Heavily stylized in their image and music, media-savvy, and ambitious in their use of lyrics, the Sex Pistols became the leaders of a new teenage movement—called punk by the British press—in the autumn of 1976.

The Sex Pistols were formed in London in 1975. Although their initial career lasted just two and a half years, they are regarded as one of the most groundbreaking acts in the history of popular music.

Sid Vicious is credited with inventing the “Pogo,” where you bounce up and down to the music. This eventually led to moshing.

Sid’s real name was John Simon Ritchie; he and John Lydon (aka Johnny Rotten) were part of a gang called The Johns. He got his new moniker when Rotten’s Hamster Sid bit John Ritchie’s finger; he yelped and said “Your Sid was vicious.”

Sid Vicious died on February 2, 1979 of an overdose of heroin his mother had bought for him. It was likely an intentional suicide as Sid was extremely depressed about his role in the death of his girlfriend, groupie Nancy Spungen. The couple were the subject of the 1986 film Sid and Nancy.

After Johnny Rotten left The Sex Pistols he formed a new band, Public Image LTD (PiL) and reverted back to his original name, Lydon.

In 2004, John Lydon appeared on a British reality TV program set in an Australian jungle called I’m a Celebrity, get me outta here! He caused controversy by saying the C-word live on British TV.

In 2005, they were voted into the Rock and Roll Hall of Fame. In true punk rock form, they refused to attend the ceremony and sent a note to Rolling Stone magazine voicing their displeasure with the institution (“Next to the Sex Pistols, that Hall Of Fame is a piss stain”). Rolling Stone founder Jann Wenner read the note in its entirety at the ceremony.

Johnny Rotten was known to wear a shirt that said “Pink Floyd sucks” as punk was rebelling not only against society, but also the complex progressive music which Pink Floyd were a perfect example of. David Gilmour (guitarist of Pink Floyd) has said that when he met Rotten that the Sex Pistol singer apologized for the stunt and admitted he was a fan of Pink Floyd.

They were known first as The Strand, then The Swankers before settling on The Sex Pistols.

Never Mind The Bollocks, Here’s The Sex Pistols is the only studio album they released. All others were live albums, compilations or movie soundtracks.

In November 2007, The Sex Pistols reformed to play five nights at Brixton’s Carling Academy and also gigs in Glasgow and Manchester. They also played on The Craig Fergurson Show and The Jay Leno Show.

Also in 2007, they rerecorded “Anarchy In The UK” and “Pretty Vacant” for Guitar Hero.

When the band was conceived, Steve Jones was the lead singer. He moved to guitar when original member Wally Nightingale left, which left an opening for a frontman. Rotten got the job when he auditioned for their manager Malcolm McLaren by lip-synching to the Alice Cooper song “I’m Eighteen.”

Johnny Rotten has described the band as “musical vaudeville” and “evil burlesque,” admitting that their image and stage shows are as important as their music. Alice Cooper was a big influence on him.

John Lydon revealed to the Scottish Daily Record that Mick Jagger paid for Sid Vicious’ lawyers when Sid was under arrest for the murder of Nancy Spungeon in 1978. “I don’t think Malcolm lifted a finger,” mused Lydon. “For that I have a good liking of Mick Jagger.”

In an interview with John Lydon, he talked about how being outspoken has been both a blessing and a curse. “I can end up my own worst enemy – just by speaking as I find,” he said. “Sometimes, the truth hurts. But it needs to be told.”

John Lydon and his wife Nora almost died in the December 21, 1988 Lockerbie bombing – they were booked on Pan Am Flight 103, which was destroyed by a bomb, killing all 243 passengers and 16 crew. However, according to Lydon, “she didn’t pack her case in time, so we canceled.”

On October 8, 1976, EMI signed the Sex Pistols to a two-year contract. However the label got cold feet when the band caused a national scandal by swearing on-air during an early evening live broadcast of a program hosted by Bill Grundy. Richard Branson quickly advantage of the situation and signed the Pistols to Virgin. He recalled to NME:

“Having seen them live, I was determined to sign them even though they had already signed with EMI. I called the company’s president and said, ‘If you want to get rid of the Sex Pistols, I’m happy to step in.’ He said, ‘No, I’m very happy with them.’

Anyway, that night they went on The Bill Grundy Show and he called my home number and said, ‘We’ll hand over the contract at 6am tomorrow.’ Malcolm McLaren, being very Machiavellian, signed the band with A&M the next day and got more money. But Sid Vicious threw up all over the A&M office [so the company changed its mind] and we finally got them in the afternoon. The Sex Pistols gave Virgin an edge.”

Their original bass player Glen Matlock left the band and was replaced by Sid Vicious in 1977 before Never Mind the Bollocks… was released. The split was precipitated by conflict with Johnny Rotten, although Malcolm McLaren claimed he was fired because of his Beatles influence. Matlock says he’s “not that big of a Beatles fan.”