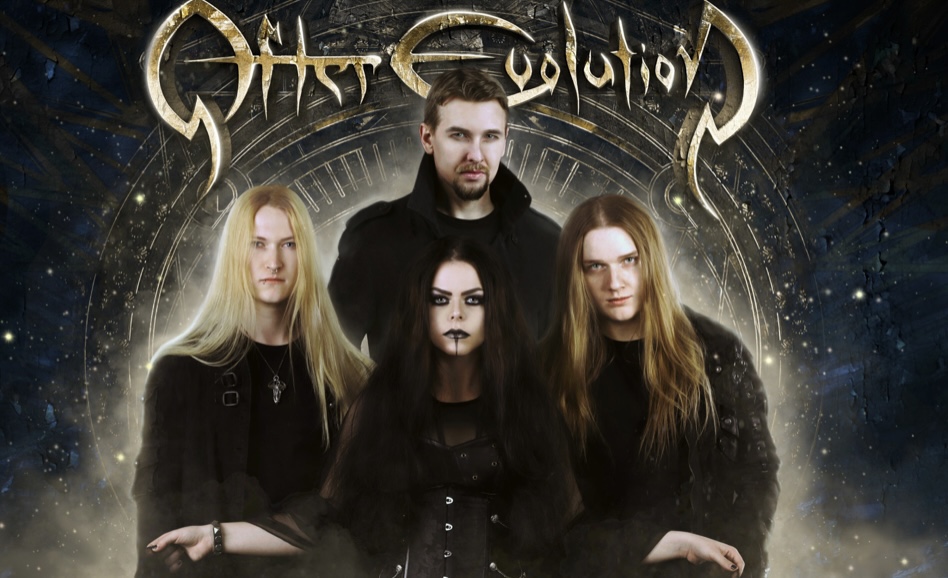 Female fronted symphonic metal discovery AFTER EVOLUTION have signed a licensing deal with Wormholedeath for their album “War Of The Worlds”, which is due for release on June 17th, 2022.

You may ask, “who are they? where did they come from?” and the answer is simple. we came here to the earth from far away, to tell you the story about our world and how we have been born in this one.
the each of us have been reborn in different year, different time, under the different star, moon and sun to connect our destinies in one.
We are the storytellers, ancestors, wanderers of the universe and time, the artists carrying bond between the melodies of the dark and light, death and life, hope and despair and fire and ice …
We are the After Evolution.
The way of finding each other was not easy at all. Everything started one day, when Nikolette met Michael. They knew their meeting meant much more but for the whole reveal of the truth they needed to find the remaining two reborned.
It was the year of 2013 when Nikolette and Michael started with collecting the shards of memories before the big reborn. Piece by piece and part by part of single memory has been written into melody and poetry connected in one. Nikolette and Michael met a lot of souls astray but neither one was the one of the reborned. So after some time they just went by their own path of life.
When the year of 2016 appeared, Michael and Nikolette decided to reveal the part of their threnodies to the world. People loved their melodies accompanied with ancient stories of the other world so they continued with writing more and more of their story. Also by the end of the same year Nikolette with Michael found the third reborned named Adam, so they continued they journey side by side. The melodies of past have been spread really fast so a lot of big and well known collectors of great ancient stories, art and melodies wanted to help to the After Evolution on their path and spread their stories to whole the world. So Nikolette, Michael and Adam with another soul astray agreed and decided to travel to the great Italy to imprint their story connected with dark melodies and ancient power into memory of the world forever.
It was the year of 2018, the hot summer days, when After Evolution finished the big reveal of the truth and with last drop of the ink on the paper they finished the last note in the big part of their story and their past. Unfortunately that soul astray was not ready for the journey of the After Evolution, so he left when he saw the path and went his own way. The path got really complicated. But they didnt give up and continued on their way even if it was full of thorns and pain. They followed their destiny.
On their journey to imprint their story written in melodies to eternity of the world, they met a brave traveller named Ilya, who helped them to finish the rest of their journey and fight the monsters along the way. At the end of the path, he went his own way and After Evolution went on the expedition to find the last lost reborn. The missing piece of the After Evolution.
Later that year of 2018 the fourth lost reborn, vitek has been found and continued his journey along with the rest of the reborned, After Evolution and their destiny have been fulfilled. They were able to connect all the shards of their memories and finish the story of the ancient world they came from. They found out who they truly are and about their true abilities.
With the time going by, there were a lot of thieves of ancient art who wanted to steal some of their magic and treasures they had, but it never really happened, the things got just a little bit complicated during the protection of their secrets. After Evolution finished their whole story and they have collected and connected with their ancient power all shards of memories together. All that creation was so exhausting for them that After Evolution fell into the deep rest and recovery to gain the energy again and summon all the power and inspiration back to them. When ​the dark times dissapeared, After Evolution, with clear mind and full of energy were ready to accept their destiny and share their story with the world and spread the enchanting melodies again.
With year of 2022 they shared with the world the story about the big war from the ancient world and the war of the worlds chants floated by the world

Music inspiration :
My inspiration is in epic orchestral music like movie or game soundtracks for example – Two steps from hell, Audiomachine, Hans Zimmer, Ivan Torrent etc. I was fascinated by Evanescence, Nightwish, Within Temptation and Epica because they connected the orchestras and the metal elements and I really liked that. So I knew I wanted to play symphonic metal but more symphonic, more like epic orchestral metal, so every instrument like guitars, drums and also vocals are composed on the orchestral base not the opposite.

Concept :
Everyone was asking us “what does AFTER EVOLUTION means?” and I didnt know why they are asking me that to be honest bcs I have never saw asking someone Nightwish what their name means. But I told myself „okay, I will give my band the meaning“ and I created a whole story about who we are and what is our music about. I love fantasy stories and most of my time I am in clouds with my head so why not. So I started to creating a storyboard and slowly connecting the story with the music.
Development :
I created whole the story in about 2 weeks and then the music work was next on the list, so I have separated the parts of the story to 11 sections to create 11 music parts for the album. I stopped at each section and imagined the feelings of the main character, the enviroment and what is happening and I tried to feel everything as if I was there to match the music and orchestras with that feeling of the story. When I have created the orchestras I had already in my head the melody of the vocals and some idea how the guitars and drums should sound. When that was ready I came back to the paper sheet where I have written what is this part about and I’ve started with writing the lyrics. It is really my favourite part because I love writing in contrasts if it is possible and some poetic riddles to think about for example : „red roses are falling down on the cold white snow“ means in my style of writing : falling blood on the ground – I really love making that kind of texts if I have a space for that. Some texts are just describing what is happening and the story and some are more poetic, it really depends on the mood of the song. So that is how I am developing and making the music and its concept etc.

“War Of The Worlds” cover & tracklist

“War Of The Worlds” album teaser

After Evolution Band on Tik Tok