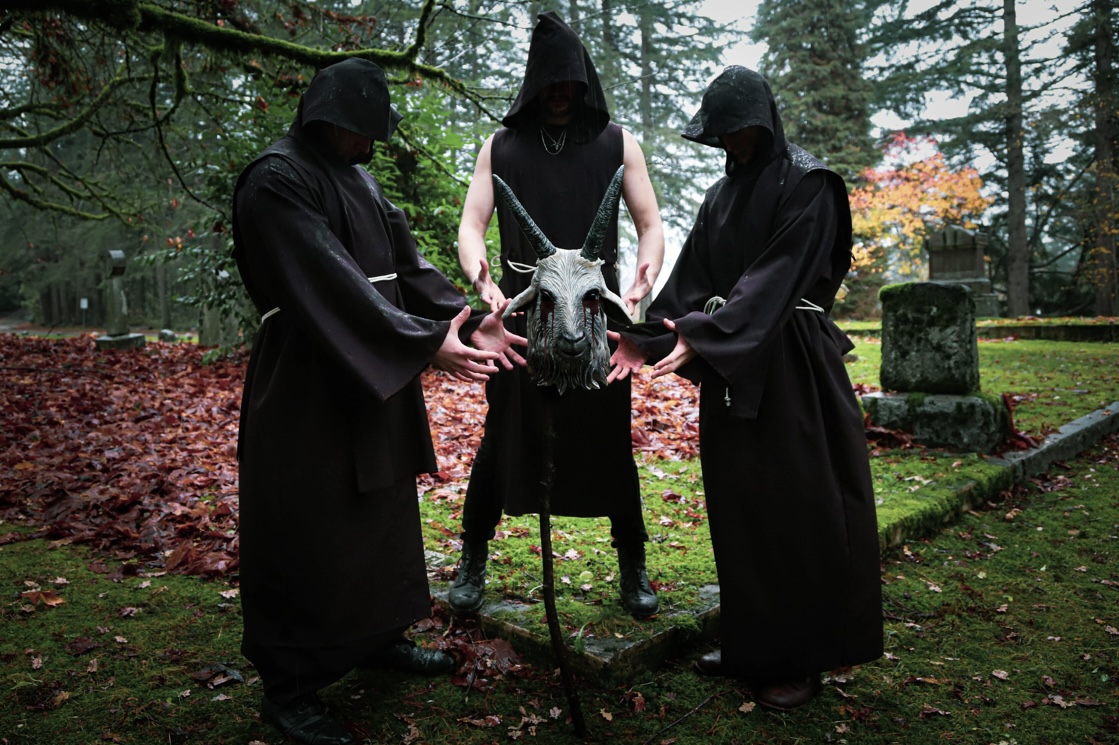 Last month, Thirteen Goats stampeded out of Canada and onto the global metal scene with the hyperkinetic, politically-charged “Return to Ruin”. That single (from their upcoming debut record, “Servants of the Outer Dark”) was accompanied by an animated video (can view below) that ended with a giant sunflower bursting out of Vladimir Putin’s skull—a deliberately unsubtle nod to the band’s Eastern European roots and aggressive anti-imperialist sensibilities.

“This was the first song Rob [Fitz-Gerald, guitars/vocals] and I wrote together. He came up with almost all the riffs, and I wrote the lyrics, which tell the story of a priest determined to cleanse the world of sinners through gruesome murder. It’s about the hypocrisy of people who preach peace and love but enforce their values through violence. I also managed to sneak a Cryptopsy reference into the chorus—see if you can pick it out!”

The music itself combines sinister, slithering guitars with bone-breaking blast beats and some of the album’s most vicious vocals. According to Miles, “weird shit” happened while he was recording his takes—the studio lights kept flickering, and the temperature dropped noticeably. “I’m not superstitious,” he says, “but it felt spooky—like I wasn’t alone in there. And when I listened to the final tracks, they sounded a lot more evil than they had while I was doing them. So who knows?”, he grins. “Maybe I had a little help from beyond.”

The single was written in a single session during the introductory jam between Miles and Fitz-Gerald, who are the band’s core songwriting duo. It cemented their friendship and got Thirteen Goatsoff the ground. “Servants of the Outer Dark” is nine tracks of cathartic and multi-layered metal ranging from serious personal topics like suicide awareness on “Constant Torment” to balls-out camp on the hilariously literal “Vacuum-Induced Head Explosion”.

A hybrid of Florida death metal, UK grindcore, and classic 80s thrash, Thirteen Goats successfully combine their influences into something greater than the sum of their parts. They deliver an impressive force of blast beats, guitar solos, and grown men yelling ‘BLERGH’ alongside big, catchy hooks and choruses—maintaining the classic formula enough to impress old-school fans while keeping it fresh and accessible for newcomers.

The band is just getting started, but they have an arsenal of material waiting in the wings. They are a band to watch, especially by fans of Cannibal Corpse, Deicide, and Death.

The single “Unholy Mass” can be heard via its premiere on Bravewords HERE.

About:
Eclectic, over-the-top, and just a little weird, THIRTEEN GOATS takes cues from some of extreme metal’s most infamous acts (Death, Carcass, Cannibal Corpse) to create a tongue-in-cheek blend of different genre hallmarks that’s as hooky as it is heavy. This ain’t your dad’s death metal, but we kept the best parts. Horns up!