Dee Snider says that AC/DC‘s upcoming album will feature “some surprises” related to late rhythm guitarist Malcolm Young that will blow the minds of the band’s diehard fans.

The TWISTED SISTER singer discussed AC/DC‘s plans for the new disc during an appearance last Thursday (February 20) on SiriusXM‘s “Trunk Nation” show to promote a Change.org petition to get the legendary Australian hard rock act to perform at next year’s Super Bowl.

Snider said: “I had dinner with [AC/DC singer] Brian[Johnson] recently, and we talked about [the band’s return to activity]. He told me a lot of stuff, and a lot of stuff that I don’t wanna say. But we know from the photos, and Brian confirmed it, they’ve been in the studio, they’ve been recording. The original — I don’t say the ‘original’ guys, because a lot of ’em are gone, but I say the ‘classic’ lineup is back together and there are some surprises, which I can’t talk about, regarding Malcolm Young that just had my jaw on the floor. I will say he will be present. So this is AC/DC as we know and love them.”

Last December, Snider confirmed that Johnson was doing “good,” four years after the the AC/DC frontman was forced to leave the band mid-tour due to a dangerous level of hearing loss. He was eventually replaced on the road by GUNS N’ ROSES vocalist Axl Rose.

Snider was responding to Twitter questions regarding his earlier comment that the surviving members of AC/DC were working on a new studio album which will reportedly be dedicated to Malcolm Young.

Snider‘s latest comments seem to corroborate a September 2018 report from JAM! magazine, which cited a “reliable source inside the AC/DC camp” as indicating that the band was recording a new LP which will utilize previously unreleased guitar tracks from Malcolm Youngon all the songs.

The magazine’s web site reported at the time: ‘Five years prior to the (2008) ‘Black Ice’ LP, AC/DC‘s 15th studio release, Angus and Malcolm Young . . . literally wrote hundreds of songs, many were recorded and have been stashed away until now. Angus has decided to selected [sic] the best tracks from those recordings that Malcolmplayed on and is now back in the studio recording and mixing them with fellow bandmates Phil Rudd [drums], Cliff Williams [bass] and, yes, Brian Johnson on vocals.”

A year and a half ago, Johnson and Rudd, along with guitarists Angus Young and Stevie Young, were photographed outside Vancouver’s Warehouse Studios. Based on the pictures, the assumption was that AC/DCwas in the midst of making — or at least planning — another album, with Rudd and Johnson both back in the lineup.

Ever since AC/DC completed the tour cycle for its 2014 album “Rock Or Bust” three and a half years ago — a turbulent trek that weathered the forced retirement and eventual death of co-founder Malcolm Young, plus the departures of Johnson, Rudd and Williams — fans have wondered whether sole remaining founding member Angus Young would keep the band going or decide it was time for AC/DC to pack it in.

In February 2019, a photo surfaced on social media suggesting that Williams has also returned to AC/DCand will appear on the rumored comeback album which is expected to be released in the coming months.

More than 100,000 people took part in a tribute to legendary AC/DC singer Bon Scott on March 1 in Australia.

“Highway To Hell” took place on the 40th anniversary since Scott was laid to rest at Fremantle Cemetery.

Perth’s Canning Highway was closed to all vehicles except eight trucks that hosted eight different bands all singing their own version of AC/DC songs to commemorate Scott‘s passing.

Artistic director of the Perth Festival Ian Grandich said AC/DC had a special place in the heart of Perth and Fremantle.

“I know this highway like the back of my hand, and I knew the stories about AC/DC playing at the Raffles, and Bon drinking at the Leopold Hotel,” he said.

A diverse selection of bands, including Finnish bluegrass outfit STEVE ‘N’ SEAGULLS, Japanese rock trio SHONEN KNIFE, AMYL AND THE SNIFFERS, THE PIGRAM BROTHERS, THE WA POLICE PIPE BANDand the PERTH SYMPHONY ORCHESTRA are among those who gave Scott the epic tribute he deserves.

Scott was invited to join AC/DC by Glasgow-born brothers and founding members Malcolm and Angus Young in 1974, and achieved international stardom before his death at the age of 33 in 1980 from alcohol poisoning.

AC/DC guitarist Angus Young told The Pulse Of Radioa while back that the band almost didn’t get past Scott‘s death. “Bon was the big… He was a full-on frontman, plus he had this great character, you know. I mean, he just lived that rock ‘n’ roll life. With Bon, what you saw was what you got, and, yeah, it

AC/DC: Let There Be Rock

AC/DC were touring in support of Let There Be Rock (1977) when I saw them open for Kiss in December of that year.

To be completely honest, I hadn’t heard a note of AC/DC’s music at that point in time, but I had heard of the band. Little did I know that they quite nearly stole the show from Kiss (who were my undisputed favorite band at that time). Oh yes, and I was in the front row, so I witnessed AC/DC with Bon Scott at the peak of their formidable powers!

Anyway, Let There Be Rock has been claimed by Angus and Malcolm Young to be the first fully formed AC/DC album.

They were in danger of being dropped by their label at the time (crazy, right?) and they were pissed off about it. The result? Guitars…LOUD guitars…and a legend was born.

The songs would go on to be concert staples in the live show for decades to come…Problem Child, Whole Lotta Rosie, Bad Boy Boogie, Hell Ain’t A Bad Place To Be, and the crushing onslaught of the title track, Let There Be Rock.

Let There Be Rock is basically a perfect album…all killer, no filler…crank it up and bang your head! 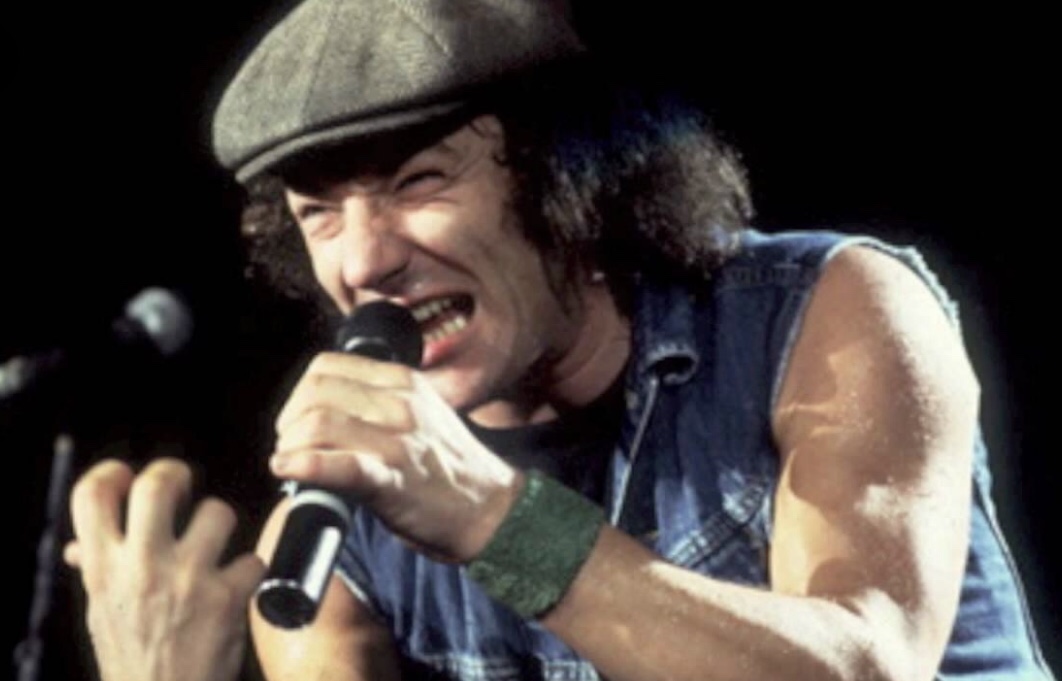 Brian Johnson of the band Geordie gets a new, slightly more high-profile gig: replacing the deceased Bon Scott in AC/DC. Johnson’s first album with the band is Back In Black, which becomes the second-best selling album worldwide behind Thriller.

AC/DC suffered a devastating blow when their beloved lead singer Bon Scott was found dead in February 1980 following a night of heavy drinking in London. They consider disbanding, but with encouragement from Scott’s family they decide to continue. 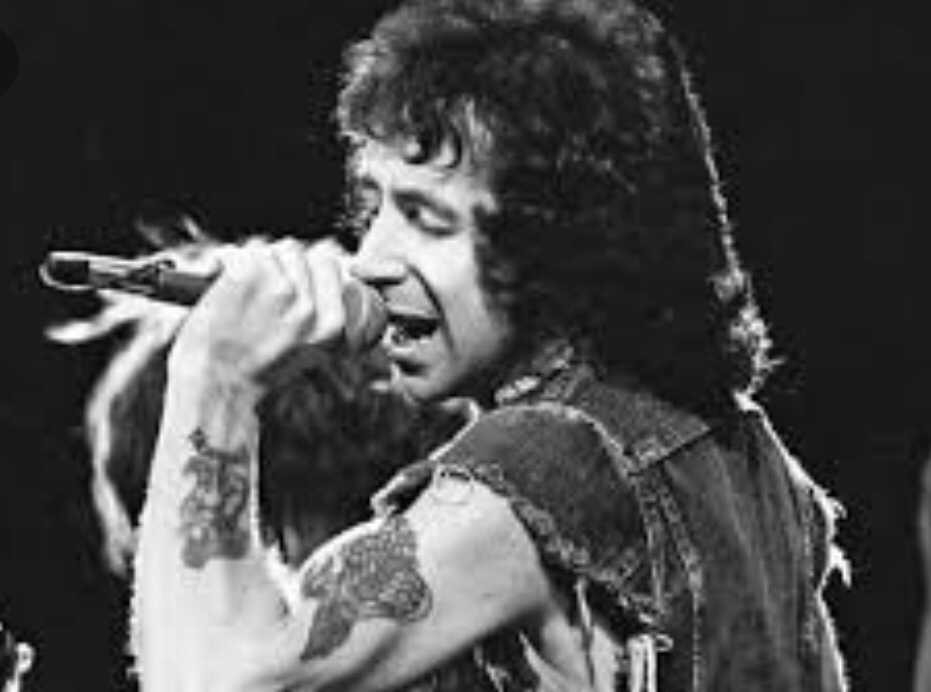 They find their new frontman in Brian Johnson, whose previous gig was with the little-known band Geordie. With the band already besieged by belittling disregard from mainstream music media and cultural critics, the announcement of an unheralded new singer arouses little excitement amongst those within conservative society.

Johnson overdelivers, writing potent lyrics for their album Back In Black and delivering them with searing vocals that evoke Scott without resorting to imitation. The album, which is dedicated to Scott, becomes one of the most successful in music history, with a hard-hitting and unpretentious brand of heavy rock that embodies a powerful honesty and viscerally resonates with audiences across the world.

Johnson turns out to be a great live performer as well, delivering rough and howling screams that are a perfect vocal accompaniment to AC/DC’s monstrous instrumental section.

Thanks to their new lead singer, the band builds on Scott’s legacy and reaches unprecedented heights, becoming one of the greatest rock bands of all time. “We just get out there and rock,” says guitarist Angus Young. “If your amp blows up or your guitar packs it in, smash it up and pick up another one.”

AC/DC was at their best in the Bon Scott era. I’m not open for debate on this, and no disrespect to Brian Johnson, because I love his work with the band quite deeply.

But let’s face it, Bon was put on this planet to sing hard partying rock ‘n’ roll, and Powerage(1978) contains some of his best stuff.

Sin City, Riff Raff, Kicked In The Teeth, Gimme A Bullet, What’s Next To The Moon?, Up To My Neck In You, Rock ‘n’ Roll Damnation, and the absolutely magnificent Down Payment Blues are all just prime AC/DC classics.

Scott’s streetwise lyrical style, coupled with that blowtorch whisky drenched voice just fit perfectly over the top of the gloriously crunchy guitar riffs and manic leadwork of the Young brothers (Malcolm on rhythm and Angus on lead).

New bass player Cliff Williams laid down the simple yet essential bottom end anchored to Phil Rudd’s airtight drumming, and another AC/DC album added to the ongoing legacy that was taking the Australian terrors to the very peak of rock royalty. Plug into some Powerage and experience the jolt of a band in total control.

Founder AC/DC member Malcolm Young has died. He was 64. Young, who was diagnosed with dementia in 2014, died peacefully, surrounded by family.

AC/DC released a statement which read, “Today it is with deep heartfelt sadness that AC/DC has to announce the passing of Malcolm Young.

“Malcolm, along with Angus, was the founder and creator of AC/DC. With enormous dedication and commitment he was the driving force behind the band. As a guitarist, songwriter and visionary he was a perfectionist and a unique man. He always stuck to his guns and did and said exactly what he wanted. He took great pride in all that he endeavored. His loyalty to the fans was unsurpassed.”

Angus Young added, “As his brother it is hard to express in words what he has meant to me during my life, the bond we had was unique and very special. He leaves behind an enormous legacy that will live on forever. Malcolm, job well done.”

Young was born in Glasgow in 1953. He moved to Australia aged 10, and formed AC/DC in 1973. He was a constant member of the band until retiring due to ill health in 2014, when he was replaced by his nephew, Stevie Young.

AC/DC were inducted into the Rock and Roll Hall of Fame by Aerosmith’s Steven Tyler in 2003. In July, Young’s elder brother George – a member of 60s band The Easybeats and the producer of some of AC/DC’s early recordings – died at the age of 70.