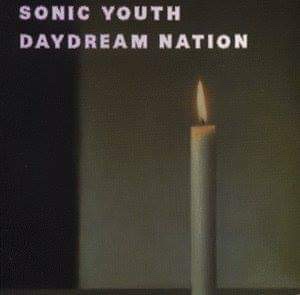 Daydream Nation (1988) was the album that catapulted Sonic Youth into the big leagues, gaining them enough critical and public acclaim to get them signed to a major label.

Daydream Nation has been widely recognized as Sonic Youth’s best work, and in 2005 it was chosen by the Library Of Congress to be preserved in the National Recording Registry. Additionally, Daydream Nation was integral to the outbreak of alternative rock in the ’90’s. Some of my favorite stuff from this double album include Teenage Riot, Hey Joni, Eric’s Trip, Trilogy, Silver Rocket, Rain King, and Total Trash.

I really love the atonal noise that Thurston Moore and Lee Ranaldo conjured out of their guitars and incorporated into their inspired version of classic rock.

Sonic Youth wrote intelligent songs that embraced punk spirit, art, and works of literature, and threw in a healthy dose of musical anarchy to come up with a noisy dose of pure inspiration and a sound unlike any other band of their time.

I think their music is quite timeless, and it will age quite gracefully, pulling curious listeners into its orbit for generations to come.