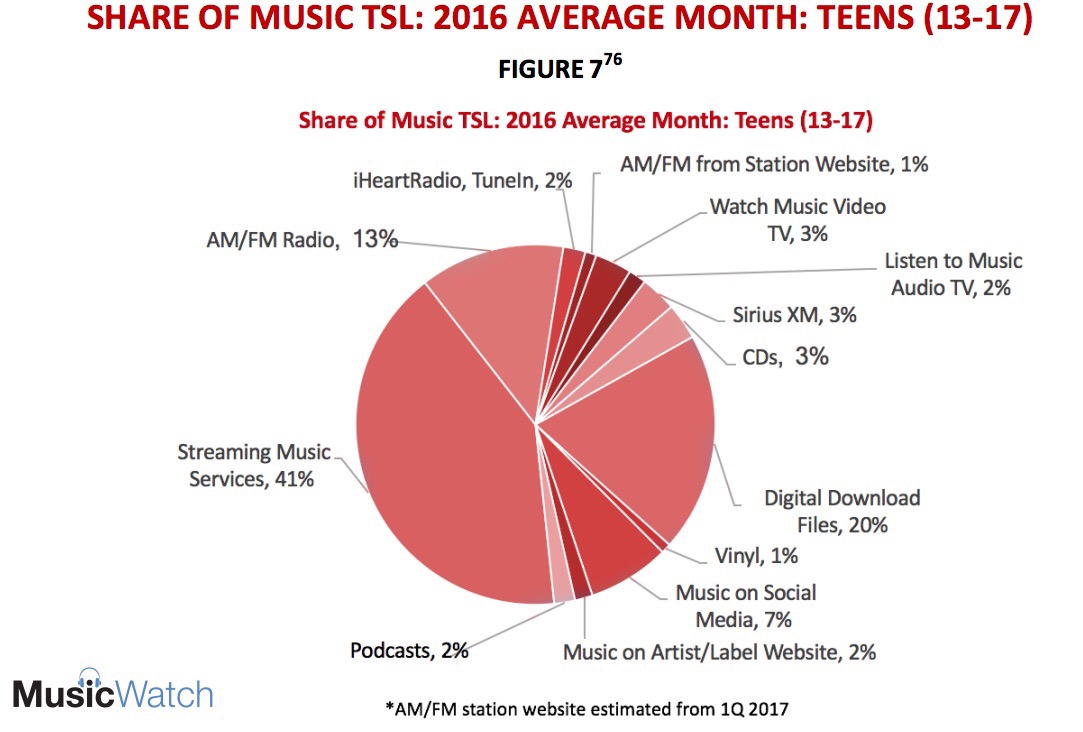 The question was simple: ‘How do you listen to your music?’  The answers were anything but.

So, how do teenagers really listen to music?  What started as a simple question by a music research firm revealed an unbelievably complicated set of answers.  In fact, most people between the ages of 13-17 exercise a myriad of options when it comes to accessing, discovering, and relaxing to music.

Most amazingly, that blend includes both old and new formats, with everything from AM/FM radio to podcasts.

But the most amazing part: most 13-17 year-olds prefer formats that didn’t even exist when they were born.  But that doesn’t mean they’re necessarily opposed to age-old formats like broadcast radio.

The results were tallied by MusicWatch, which regularly surveys thousands of teenagers in the United States.

Actually, the survey only asked which formats these teenagers had used in the past three months.  Unsurprisingly, streaming topped the list at 41%, a figure that includes ad-supported, YouTube, and premium streaming platforms.

That’s right: ‘Digital Download Files’ accounted for 20% of the answers.  That was followed by a far older format, AM/FM radio, at 13%.  So depending on the person, the methods for listening to music can vary greatly.

Sounds like a teenagers don’t really care about when a format was invented.  As long as its convenient, that’s the main thing.  But it turns out most of the other ‘convenient’ formats are newer, coming of age in the 2000s.  Here’s the rest.

Of course: many of these formats did technically exist prior to the year 2000.  For example, satellite radio and streaming from station websites existed.  But, they weren’t widespread, scaled, or easy-to-use formats for most people.

These formats, on the other hand, were definitely going strong pre-2000s.

And what about AM/FM radio?  Well, it turns out that teenagers are running — not walking — from this format.  Here’s a graph that illustrates the extreme exodus. 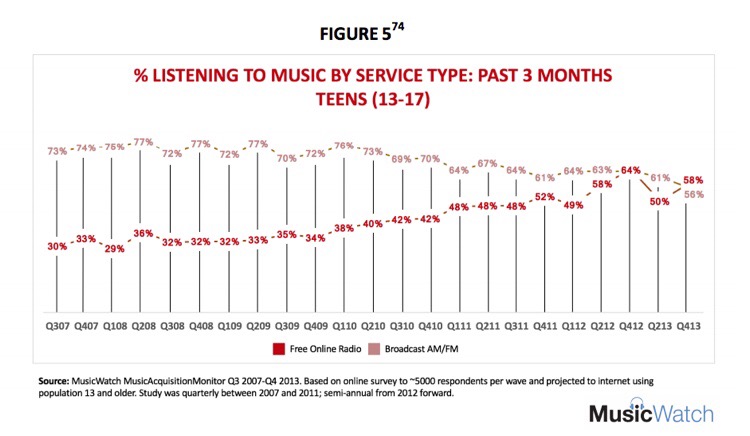 Actually, if you’re interested in the story around radio, you should probably read this article.  This dataset came from a broader radio-related study that basically says that AM/FM radio is going extinct.  “By Q4 2016, the same proportion of teens (58%) listened to music on AM/FM as online radio,” that report noted.  “It’s a remarkable transition, as online radio accounted for only 30% of teen listening in Q3 2007, compared to 73% for AM/FM.”

+ Radio Is Dead In 10 Years. This Study Proves It.

That’s a pretty serious question worth exploring, especially for those invested in vinyl’s revival.  That includes a myriad of different manufacturers, including a burgeoning class of all-in-one, lower-cost turntable manufacturers.  So what’s holding these teenagers back?

Part of the answer might be simple: moolah and mobility.  Your average teenager has little of the former, and a lot of the latter.  And none of that works for heavy, lumbering vinyl collections and turntables.  Instead, older, more established folks are more amenable to vinyl, especially those with longer-term living situations.

But not always.  Surprisingly, a big chunk of vinyl buyers are in their 20s.  Of course, twenty-somethings still move around while building their careers and future families.  But, the key differentiator is that they have incomes to blow, apartments to fill, identities to brandish, etc.

Get ready for the Z tsunami!

If you’re in the 13-17 year old bracket, you might be wondering: why is someone out studying me?  Well, the answer is simple: members of Generation Z are worth billions of dollars — right now.  And once 13-17 year-olds cross into 18-34 year-olds, they will become one of the most important buying demographics on the planet.  In fact, Zs are bigger than Boomers and Millennials (though not combined).

So yeah, companies like MusicWatch aren’t just conducting these surveys for fun.  Though I’m sure that’s part of it.  But when it comes to the future of the music industry (and other industries), Generation Z’s preferences will play a huge, huge role.