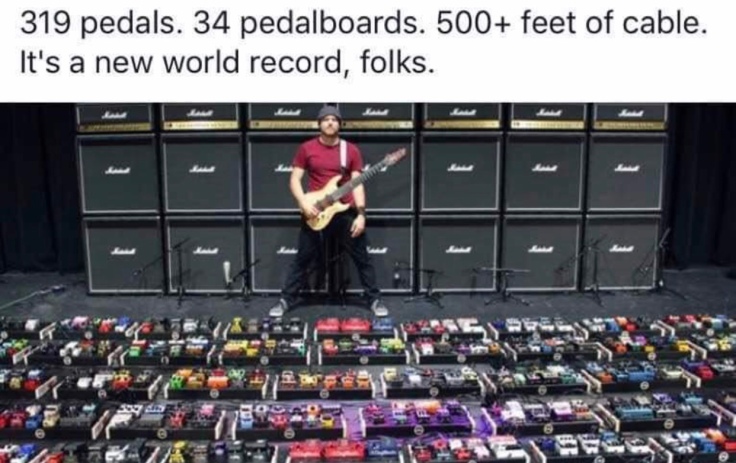 319 pedals. 34 pedalboards. 500+ feet of cable. On Tuesday July 9, Sweetwater made history by assembling the world’s largest guitar effect pedalboard – a feat that has been officially verified by Guinness World Records.

As you can hear above, the sound of every pedal turned on at once is quite unlike anything you’ve ever heard – it’s terrifying, really.

The Sweetwater team adhered to strict guidelines to break the record, with no duplicate pedals, no switching systems, and pedals only available from recognized manufacturers.

Rush legend Alex Lifeson also popped up to try his hand at playing through the rig.

The previous record was set in 2008 with 142, and was comprehensively smashed by Sweetwater’s effort, which costs $90,000, boasts 1,248 knobs, measures 70ft long, and requires 34 power supplies just to turn on.

For more info on this astonishing achievement, head over to Sweetwater. At least until Kevin Shields presumably snaps up the rig for My Bloody Valentine’s next tour…