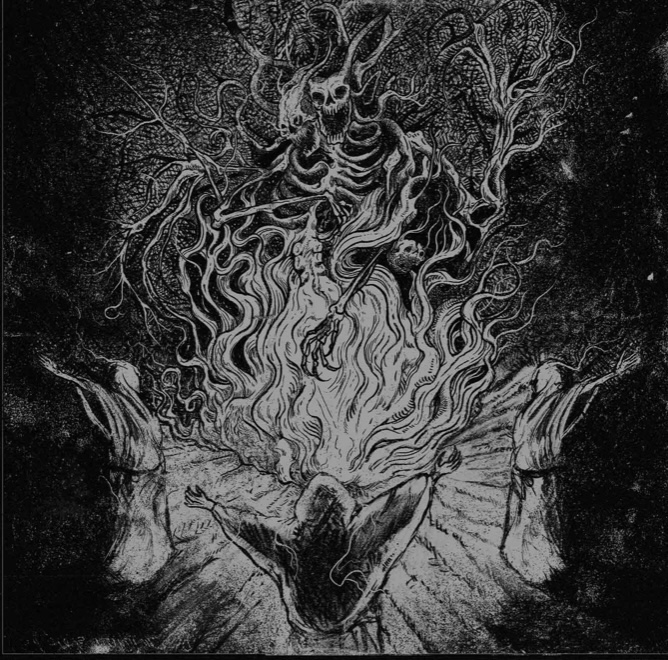 Through bonds of blood and history they stand as one, united in purpose and vision. Fear forgotten they are secure in their knowledge and their strength. As the flames leap and dance between them their voices entwine like serpents, singing words long thought forgotten. And slowly he emerges from the fire, drawn by the invocations unspoken in long, dust covered ages. His fleshless face of bone seems to grin as it rises above the blaze and his summoners fall silent and hold out their hands in welcome. Together they will wreak such havoc, visit such torments upon this world of spiritual paupers and vacuous saints. Gods too old for names, gods of bone and fire, gods of the green, of the water and the silences…their time will come once more.

In the face of an onslaught of arrogance and violence from the massed ranks of the soulless, the walking dead, a people’s spirit and artistry survives. Hailing from the currently besieged, but defiant, nation of Ukraine, Aeternus Prophet continue to reach back through time to the old gods of death and black metal, summoning the ancient spirit and infusing it with their own unique essence, creating music that stands alone, indifferent to the passing ages and the whims of the world that change with the wind. The sound of Aeternus Prophet is eternal. In 2012 the band released their first album Безжальність – or Ruthlessness – as a raw and primitive independent release. Now in 2022, ten years on from that first exhalation of their magic, Aeternus Prophet have come together with InViMa Records to present the definitive version of Ruthlessness. The lyrics have all been translated into English, the sound has been remastered, stunning new cover art has been created by Cold Poison (Ofermod, Vassafor, Auroch etc), the album has been given stylish new digi-pack presentation and InViMa Records will make sure the whole world gets to discover the incredible art of Aeternus Prophet.

Slowly, Aeternus Prophet’s power and dedication is being recognised across Europe as they have performed alongside the likes of Possession, Malthusian and Inferno, but it’s time for their music to spread farther and faster, raging like wildfire through the global underground. On March 14th Ruthlessness will step onto the world stage in its dramatic new form and the gospel of Aeternus Prophet will be carried to every horizon. They are stewards of the old ways, guardians of the true magic and their time has come at last!