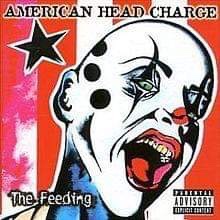 Tonight’s entree in this 365 day musical meal I have been preparing is by a band called American Head Charge.

I discovered them by witnessing their high energy set on the second stage at Ozzfest ’01.

I never got around to purchasing a copy of their current album at that time (The Art Of War), but knew that it received a lot of praise in the metal media.

However, I did grab their follow up effort, 2005’s The Feeding, and it is a killer slab of intense metal.

In particular, the first song on the album, titled Loyalty, is just a complete scorched earth beatdown.

It also sports a pretty badass video. The rest of the album follows the same formula, just relentless energy, great vocals, and in your face production.

American Head Charge were great on stage and in the studio. They never had any hits, so they can’t be called a one-hit wonder, but I wonder why they didn’t get more success, because they hit like a sledgehammer!